As we deploy video cameras in more diverse locations, from airports to manufacturing floors to street intersections, we see an increasing need to analyze and act on that video data where it is captured. Artificial intelligence (AI) at the edge, in this case computer vision, can help with use cases as varied as using heat-map analysis to prevent the spread of COVID-19 in high traffic areas or analyzing customer flow in commercial facilities. These are just two real-world examples out of the myriad applications of computer vision.

Computer vision enables systems to analyze important information from digital images, paving the way for better system intelligence. Computer vision can classify objects, interpret gestures, recognize faces, identify obstacles and more. These use cases are possible because the data is captured and analyzed where it is created. Data captured at the edge cannot always tolerate the latency involved in transmitting and processing data outside the camera. Performing AI processing to the camera itself can lead to faster and more powerful insights and is driven by more powerful yet efficient computing and memory systems like those from Micron and Ambarella.

Ambarella has historically focused on computer vision processing solutions, including its portfolio of systems on chip (SoCs) that integrates advanced image processing and efficient video compression at high resolution. Recently, its offerings have expanded to include domain controller SoCs with single-chip edge AI processing for multisensor perception and deep fusion, along with autonomous vehicle path planning and a range of other central processing functions.

Ambarella’s CVflow® SoCs are backed by a long history of research in environmental perception, resulting in camera designs with a high degree of onboard intelligence and a broad range of additional capabilities for other sensor modalities. For example, in high-definition radar, Ambarella recently acquired Oculii, which provides adaptive AI radar algorithms that can expand the resolution of traditional radar by up to 100 times. Unlike general-purpose CPUs and GPUs, Ambarella’s CVflow SoC architecture includes a dedicated AI processing engine programmed with high-level algorithm descriptions, which, according to Ambarella estimates, allows the architecture to scale performance to trillions of operations per second with extremely low power consumption.

Applications such as on-camera AI-based image recognition in security devices, powered by the CVflow architecture, have a critical need for high-speed LPDDR5 memory. The CV5 edge AI perception SoC family, introduced last year, is the first 5nm addition to Ambarella’s portfolio. It is also Ambarella’s first SoC family to include an LPDDR5/LPDDR5X DRAM interface that enables transmitting and receiving data at 44.8 gigabytes per second. By integrating this memory interface into its CV5 SoC development platform, Ambarella allows designers of a wide range of security, automotive and consumer products to feed data reliably, quickly and efficiently for sensor processing and fusion, video streaming and AI data analytics tasks.

"Our CV5 SoC was the first Ambarella chip to interface with LPDDR5/LPDDR5X,” said Ambarella Chief Operating Officer Chan Lee. “We partnered with Micron early in our development process to validate its LPDDR5 and LPDDR5X memories on our CV5 test chips. This helped us to push the boundaries of video and AI processing at the edge while maintaining low power consumption.”

Ambarella is using Micron LPDDR5/LPDDR5X and other Micron memory solutions on its CV5 development platforms to help increase processing performance for cameras, radar and other sensors used in security, automotive and consumer applications. Micron’s LPDDR5/LPDDR5X DRAM addresses next-generation memory requirements for these applications with at least a 50% increase in data access speeds and more than 20% better power efficiency, compared to LPDDR4X.

Micron’s LPDDR5/LPDDR5X uses Micron’s leading-edge 1α tech node and offers the speed and capacity needed to support the edge AI capabilities of Ambarella’s CV5 SoC family. This DRAM allows up to 68 gigabytes per second of memory bandwidth in a 64-bit system. 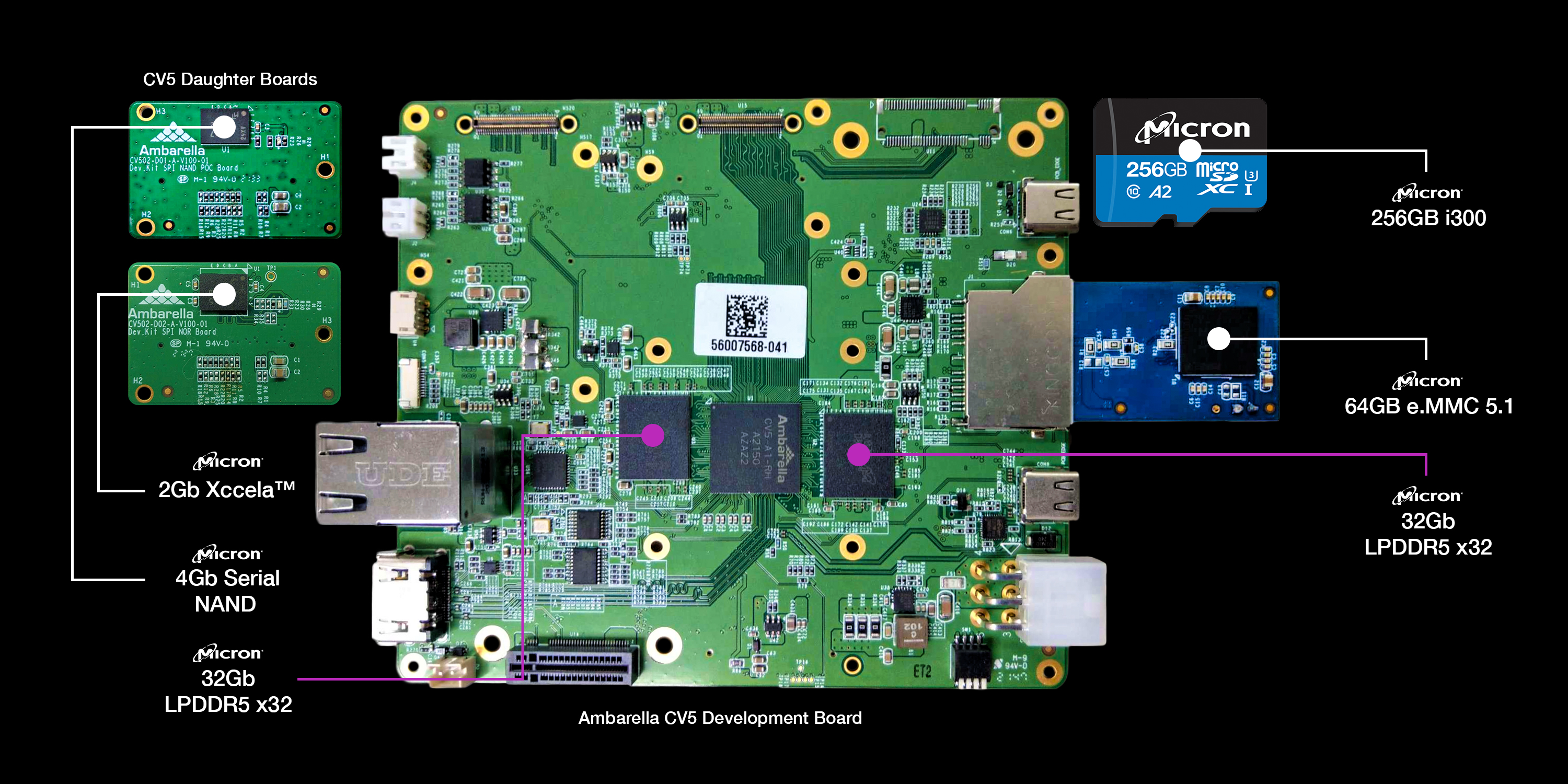 In addition to LPDDR5/LPDDR5X, Micron provides support for the Ambarella CV5 SoC family through other memory solutions, including our e.MMC 5.1, i300 microSD card, serial NAND and XccelaTM flash products.

Memory is playing a vital role in innovations such as computer vision and other forms of edge AI perception. Ambarella and Micron are delivering critical solutions for applications that require increased processing power with high efficiency and low-power memory. We look forward to seeing further implementations of what our products enable in the world.

Redge Villanueva is a Senior Ecosystem Manager at Micron, enabling Micron memories on SoC platforms for automotive and embedded applications. She has held engineering and marketing roles at Intel and Micron for 25 years. Redge holds a BSECE from University of Santo Tomas and an MBA from Sacramento State University.

Listen to Micron’s Robert Bielby, Marco Montagnana and Jim Greene discuss the company’s multi-year journey in functional safety on this episode of the Chips Out Loud podcast.
閱讀更多 >