At Micron, we are always looking for a better way to derive business value from data. With a broad line of SATA and NVMe SSDs, advanced DRAM and intelligent data solutions, Micron is making real-world solutions faster and more efficient. Along these lines, Micron joined with a leader in alternative processing products — Ampere™ Computing — to show the incredible results that are possible when its advanced, efficient ARM® CPU-based servers are combined with our advanced DRAM and SSDs for big data and cloud computing.

Big data is becoming critical for business success. Built around cloud-ready open-source applications, such as Apache™, Cassandra™ and Hadoop™, business-critical solutions require more computing power concentrated into larger data centers that maximize efficiencies of scale. The challenge for these large data centers is their dependence on current compute architectures that still use power-hungry spinning media and power-hungry CPUs.

At Micron, we know that our 5210 ION SATA SSDs are the right solution for the extremely large datasets typically found in analytics and cloud environments. To prove this claim, we first did a simple comparison between our 5210 ION SATA SSDs and the same solution using typical 10,000 RPM HDDs. The results were staggering. We tested them with the Cassandra No SQL database application using the Yahoo! Cloud Serving Benchmark (YCSB), a common benchmarking tool for cloud and big data analytics solutions. The 5210 ION SATA SSDS performed up to 39x the number of operations per second. In addition, the SSDs used much less power per operation than the HDD-based solution did.

Once we proved the benefits of Micron flash to the storage infrastructure, we wanted to understand how much more efficient we could get by changing the CPU architecture of the solution from a typical x86 CPU to an Ampere eMAG™ CPU based on enterprise-class ARM processor technology.

Using the same Micron 5210 SSD configuration to host the data, we compared the x86 and ARM CPU architectures and discovered another layer of efficiency provided by the Ampere eMAG CPU-based solution. In our tests, we discovered that, in terms of raw performance, which architecture was faster depended on the test performed. The eMAG solution performed better in those workloads that were more read-centric — perfect for big data analytics solutions; however, the x86 solution performed better in workloads that had more writes. But, even though the x86-based solutions performed better in three of the five workloads, they did so by using more power. In all tests executed, the eMAG solution was more efficient, both in terms of operations per thread and operations per watt of energy consumed. In some cases, this solution was up to three times more efficient! 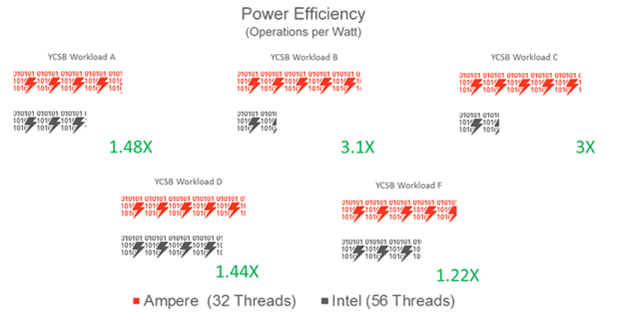 To learn more about what Micron and Ampere accomplished, you can read the full technical brief we just released. It just might be time to reevaluate what you thought you knew about ARM and flash as a solution to your big data and cloud solution needs.

Tony is a 34-year technology leader in server architectures and storage technologies and their application in meeting customer’s business and technology requirements. He enjoys fast cars, travel, and spending time with family — not necessarily in that order.

Deploying Windows servers on the new AMD EPYC™ 7002 series processors? By scaling drive count from one to eight NVMe SSDs, we tested the innovative Rome processors, which support PCIe Gen 4 and up to 64 cores and 128 threads in a single socket. See our NUMA configuration results.
閱讀更多 >

The Micron 9300 enterprise NVMe SSD family offers capacities up to 15TB with “no compromise” symmetric read and write throughput , making the 9300 a great option for your Ceph needs.
閱讀更多 >